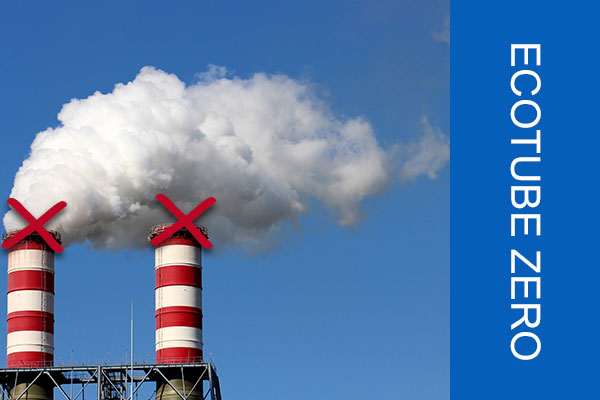 In recent times, alarming reports about the climate have succeeded each other, the levels of carbon dioxide, methane and nitrous oxide in the atmosphere are increasing rather than decreasing. At the same time, the “Hydrogen Society” is approaching fast, the storage of carbon dioxide with so-called CCS (Carbon Capture and Storage) technology is being developed, with greater and cheaper storage possibilities for captured carbon dioxide from combustion plants. The price of CO2 emissions has increased in recent years from 5 to over 90 €/tonne in the carbon trading system. The transition towards a more sustainable, energy-efficient and environmentally smart society is on the rise.

We have communicated in previous press releases that ECOMB will have a given part of this future society. We are now launching a very interesting solution.


No smoke with fire - in the long run, the chimneys can be dismantled!

Ecotube Zero is our new concept which means that all flue gas can be recirculated to the boiler with the chimney becoming redundant. Emissions to the atmosphere will be close to zero. Only a partial stream of the flue gas is separated for final storage using CCS technology. The use of pure oxygen in combustion applications and the recirculation of flue gases to boilers is nothing new, the so-called "Oxyfuel technology" has been tested in various contexts - now with Ecotube Zero we are bringing this technology to the next level.

Ecotube Zero is a new development in our Ecotube portfolio, offering a short lead time to the finished commercial product and a first installation in a power plant boiler.

It is about eliminating the nitrogen from the combustion process - pure oxygen is now supplied to the boilers instead of air (containing 79% nitrogen). But no conventional combustion chamber or furnace in the world can substitute combustion air with pure oxygen, the material problems would be excessive. Therefore, the flue gas, which then contains only carbon dioxide and water vapor, will be recycled to the furnace. This means, chemically, that carbon dioxide (CO2) has substituted nitrogen (N2) in the combustion process. Our calculations have shown that the properties of carbon dioxide as an energy carrier in the furnace are slightly better than those of nitrogen.

By means of modified Ecotubes - Ecotube Zero - the final combustion can take place with minimal excess oxygen. This means that separated carbon dioxide can maintain a very high purity, which will significantly reduce the cost of CCS technology.

We can thus combine the "Hydrogen Society" (an electrolyser form 8 kg of oxygen for each kg of hydrogen) and CCS technology with the new Ecotube Zero concept.

A patent application for the new innovation has recently been filed.

During last year, we have intensified customer contacts with this in mind, but it is only now that we will be able to go out with more complete information about the new concept.

We expect the following from this new technology;
- Near-zero emissions of flue gases into the atmosphere, chimneys can eventually be dismantled
- Minimal oxygen excesses in the gas for carbon capture with CCS technology
- Reduced costs of CCS technology
- Minimal NOx emissions without the use of chemicals such as ammonia and urea
- Today's market prices for CO2 emission allowances allow for a faster introduction of the technology with shorter payback periods
- Equally relevant for both new and old boilers